Two rooms, next door: the authorities and the activists. One wall divides them – One focus tears them apart, ideology. One group of participants plays the police, the surveillance department and the paramilitary, the other group plays activists, communists and anarchists. An interactive drama about the extreme left of Swedish activists in the 1970s, the officers that monitor them, and the terrorists who try to recruit them. 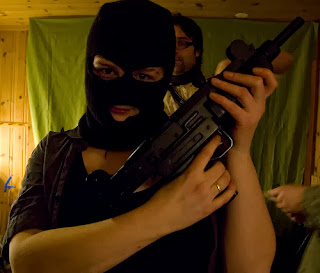 Besides being an exciting thriller this event will hopefully also reveal parallels between our time and our recent past:

Update: Unfortunately the designers were never able to finish the downloadable material for this larp. This is sadly not available. The larpscript is in the book and PDF, though, if you would like to make your own version of the larp.